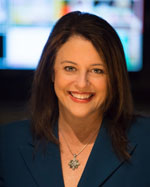 Faith Sidlow is an award-winning broadcast journalist and an associate professor of broadcast journalism. Faith worked as a reporter, anchor and producer for the Fresno NBC affiliate for 28 years before transitioning to academia. Her early broadcast career included radio reporter and board operator at KPBS-FM; San Diego reporter for KNX News Radio, Los Angeles; and research intern for CBS Television News in London.