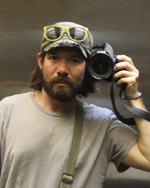 Additionally, Professor Therkelsen has worked with National Geographic Student Expeditions as a photography and videography lead in the Galapagos Islands, the Australian Outback, the Great Barrier Reef, Tuscany, Iceland, London, Paris, Barcelona, the Himalayas and the Namib Desert.

When not creating or teaching media, Professor Therkelsen can be found in the Sierras, on his bicycle, or in a large, open sunny field.