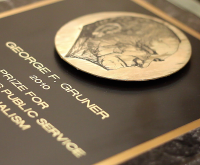 The George F. Gruner Awards for Meritorious Public Service in Journalism annually recognize outstanding community service in newspaper journalism in the central San Joaquin Valley. The awards, which honor Mr. Gruner, a former executive editor of The Fresno Bee, rank among the top journalism honors in the state.

The McClatchy Company established the Gruner awards in 1989. The Department of Media, Communications and Journalism administers the competition and co-hosts the awards banquet with The Fresno Bee, which provides a grant to make the awards possible. The banquet takes place each April.

George F. Gruner retired in April 1988 after a career in journalism covering 46 years, including 33 years on the news staff of The Fresno Bee. Before joining The Bee, he worked for 10 years as a reporter for the Oakland Tribune and two years as a copy editor on the civilian staff of the European Edition of The Stars and Stripes, the armed services newspaper published in Germany.

Gruner was a figure in a Freedom of the Press issue in 1976 when, as a member of the “Fresno Four,” he was jailed for contempt of court for refusing a judge's order to reveal a confidential source of information used in The Fresno Bee's news stories concerning a city official. He and three other members of The Bee's staff refused to reveal the source and spent 15 days in custody before being released. The “Fresno Four” received wide support from journalists and many other individuals and organizations throughout the United States for upholding the right to maintain confidential sources.

Since his retirement, Gruner has written two books, a history of the battleship USS California and another on the coastal passenger liners Yale and Harvard.