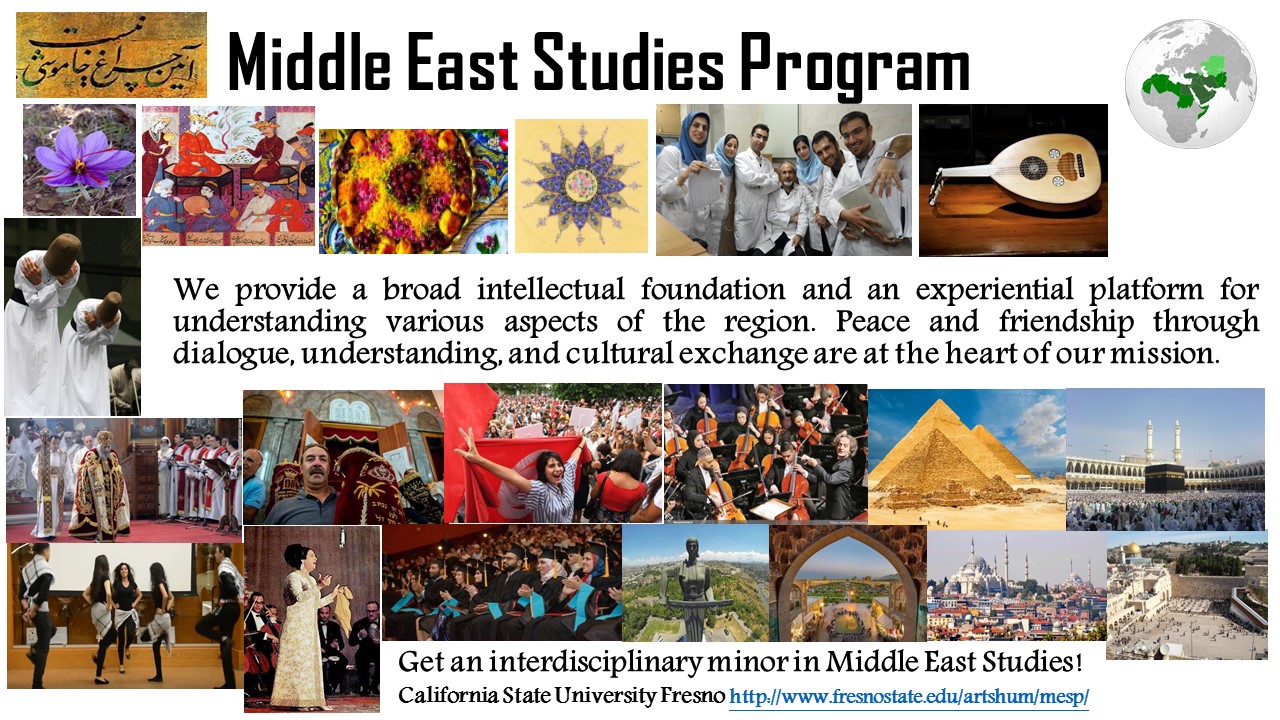 The Interdisciplinary Minor in Middle East Studies is housed in the College of Arts and Humanities Department of Philosophy, in collaboration with the College of Social Sciences.  Faculty members with expertise in areas related to Middle East Studies are spread out among various departments in the Arts and Humanities and the Social Sciences and some in the Craig School of Business.

***To replace an elective course with another MES-related course please request an approval from the MES Program Director, and then fill out the necessary forms with the help of your Department/College Advisor***

The Minor in Middle East Studies is a broad, interdisciplinary program designed to provide students from all disciplines with an introductory foundation of knowledge about different subjects related to the Middle East. Students will select from a variety of courses offered throughout the university that study the linguistic, social, cultural, artistic, literary, historical, political and economic factors that define this region of the world. Upon completion of the minor, students will be able to communicate in one of the languages spoken in the region, have a broad contextual understanding of the region, and be afforded the opportunity to gain in-depth knowledge in one or more areas of study related to the region. The minor is composed of 21-23 units. These include 3 units of a required lower-division introductory course MES 10; 6-8 units of lower-division courses in Middle Eastern languages selected from Arabic, Armenian, Hebrew, and Persian; and 12 upper-division units selected from courses offered by the departments participating in this program. Courses taken for the minor may count toward fulfilling General Education requirements, but not toward fulfilling the student's major. Students in the minor must maintain a minimum GPA of 2.5.

*Other courses may be used to fulfill electives upon approval by minor advisor.  Some options include but are not limited to:

—French 149—Voices of Africa— Study of representative works by African writers which reveal the attitudes of modern Africans toward their land, their traditions, and their encounter with the 21th century world. Course taught in English. G.E. Integration IC.

—Economics183—Political Economy of the Middle East—

Economics 183—Political Economy of the Middle East— A survey of historical, social, cultural, political, and economic development in the Middle East.

History 107—Modern Middle East—Analysis of Middle Eastern history with emphasis on the 19th and 20th centuries.

Music 171—Introduction to the World's Music—Exploration of selected musics of the world from the perspective of ethnomusicology or study of music as an aesthetic communication that possesses meaning only in relation to specific, situated socio-cultural contexts.  Study of selected musical forms and their relationship to social formations.  GE Integration IC.

Philosophy 165T—Islam—Multidisciplinary and comparative introduction to Islam. An examination of how four particular issues have been interpreted over time from anthropological, sociological, and comparative religious perspectives.