About the M.K. Gandhi Center: Inner Peace and Sarvodya

Mohandas K. Gandhi (1869-1948), popularly known as Mahatma Gandhi has been acknowledged as an exemplary figure by peace leaders and proponents of social, economic, political, and racial equality. His methods of ahimsa (nonviolence) and satyagraha (Truth-force; Love-force), generally known as nonviolent resistance and nonviolent direct action, have been used by world leaders and movements. Gandhi demonstrated the force of Truth/Love through struggles involving nonviolent methods to improve the lives of his fellow beings. Gandhi has inspired the actions of leaders of different backgrounds and cultures, including Howard Thurman, Dr. Martin Luther King Jr., Congressman John Lewis, the Reverend James Lawson Jr., Cesar Chavez, Dolores Huerta, Nelson Mandela, Arne Ness, and the Tibetan leader, Dalai Lama. He has been a subject of scholarly commentary and a source of inspiration for activists who seek to confront structures of violence, racism, oppression, and inequities. The monuments dedicated to the leaders of peace at Fresno State’s Peace Garden are a testament to Gandhi’s global impact.

Gandhi, the most influential advocate of nonviolence, focused on moral living and cultivating inner peace. He used the term Sarvodaya, the well-being of all, as the motivating factor for his ethical philosophy and practice. The M.K. Gandhi Center will focus on intellectual analysis and practical opportunities to explore Gandhi’s action-oriented moral approach to engaged ethical living and its applications to our personal lives and the world.

You must not lose faith in humanity. Humanity is an ocean. If a few drops are dirty, the ocean does not become dirty. And do not let your body suffer. You have to take much work from it. ~ M.K. Gandhi, 1947

M.K. Gandhi Center: Inner Peace and Sarvodaya, housed in the Department of Philosophy at Fresno State, is a unique organization in the Central Valley and the United States.

This collaborative initiative underscores the university’s commitment to educating current and future generations about Gandhian principles and practices of inner peace and Sarvodaya through courses, research, service-learning projects, and public events. The Gandhi Center focuses on interdisciplinary study and programming of peace, uplift of all, non-harming, and inner and social transformation, all of which connect with various subjects, including philosophy, religion, peace and conflict studies, social work, business ethic, music, and arts. The center also provides educational resources related to Fresno State's Peace Garden.

M.K. Gandhi Center: Inner Peace and Sarvodaya seeks to enhance Fresno State’s larger education goals by inspiring and providing tools to our students for personal transformation and dedication to serve our larger community.

Veena R. Howard, Ph.D., is Professor of Asian Religious Traditions in the Department of Philosophy at California State University, Fresno. She also holds the Endowed Chair in Jain and Hindu Dharma. Her publications include the books, "The Bloomsbury Research Handbook of Indian Philosophy and Gender" (ed.), (Bloomsbury, 2019); "Dharma, Hindu, Jain, Buddhist, and Sikh Traditions of India" (ed.) (IB Tauris, 2017); and "Gandhi’s Ascetic Activism: Renunciation and Social Action" (SUNY Press, 2013). An Indian edition of her 2013 Gandhi book was published in 2022. She has also authored numerous peer-reviewed articles including “Oxford Bibliography Article: Mohandas K. Gandhi” (Oxford University Press, 2019); “Rethinking Gandhi's Celibacy:  Ascetic Power and the Empowerment of Women” (The Journal of the American Academy of Religion, 2013), She has also translated three books from the modern Sant tradition from Hindi into English. She has served on the Board of Trustees of the Parliament of the World’s Religions. 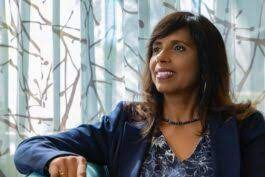 The Ravi and Naina Patel foundation seeks to promote increased happiness through spirituality and self-transcendence. Their work focuses on homelessness, education, environmentalism, nutrition, and spirituality in their local community and worldwide. Additionally, their CBCC Foundation focuses on medical philanthropy. The foundation, based in Bakersfield, pledged 1.5 million in a generous donation to establish this Endowed Center for Mahatma Gandhi Center of Inner Peace and Sarvodaya. The establishment is a historic step in California and beyond: it underscores their commitment to educating our current and future generations about Gandhian principles.