Women's Editor for the Fresno Bee; Senior Management in the McClatchy Company 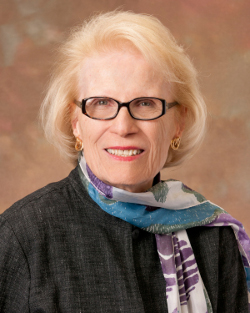 Desa Belyea was born and raised in Fresno, and spent most of her career in the newspaper business. At 16, her first newspaper job was during summer vacation as a reporter for the Sanger Herald.

While attending Fresno State, Desa wrote for the Collegian and penned a weekly Fresno State column for The Fresno Bee. In 1951 she graduated with degrees in journalism and political science.

After leaving campus, Desa found public relations work in San Francisco, where she also met George Belyea, who became her husband. They returned to the Valley where George earned an accounting degree from Fresno State.

Desa joined The Fresno Bee as women’s editor, and was appointed features editor and then Sunday editor before becoming the first nonfamily woman promoted to senior management in the McClatchy Company.

As assistant managing editor, Desa was responsible for the newsroom’s strategic planning -- a groundbreaking position for women in the field. She was instrumental in realigning The Bee’s resources to better serve the region’s diverse population and changing demographics.

Desa holds a deep commitment to Fresno State Department of Media, Communications and Journalism and has been a generous contributor. In 2012, she was installed in the MCJ Hall of Fame.

Desa has been a community adviser for the Junior League of Fresno, and was a reading volunteer for many years at Pinedale Elementary School.

George and Desa traveled extensively during their almost 45 years of marriage before he died in 2001.