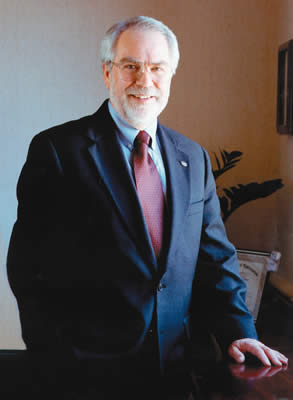 Dr. Geoffrey Gamble became the 11th president of Montana State University in December of 2000.
Prior to Montana State, Gamble was the Provost and Senior Vice President at the University of Vermont and served as chief academic and operating officer. As such, he was responsible for the annual budget, operations of academic colleges (including Medicine) and academic/support units, institutional planning, and interface and staff support for the UVM Board of Trustees.


Prior to his service at the University of Vermont, Gamble was at Washington State University where he rose through the ranks to professor of anthropology. During his tenure at WSU, Gamble served as interim Provost for one year, Vice Provost for five years, and held other administrative posts including Department Chair, Director of the Museum of Anthropology, and Director of Summer Session. During his tenure as Vice Provost, Gamble worked with the evolution of the four WSU campuses into "a single university, geographically dispersed."


Gamble is the author of two books and a dozen articles on Native American languages and has presented numerous scholarly papers. He has won grants from the National Endowment for the Arts and the National Endowment for the Humanities as well as other organizations and has received service awards from the State of Washington, WSU, and Mujeres Unidas.
Geoffrey Gamble holds a B.A. in English from Fresno State College, an M.A. in Linguistics from California State University, Fresno and a Ph.D. in Linguistics from the University of California, Berkeley. He spent a year as a postdoctoral fellow at the Smithsonian Institute.