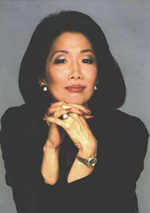 Born and raised in Hawaii, Jan graduated from California State University, Fresno in 1970 with a degree in Journalism.  For more than 14 years, Jan Yanehiro says she had "the best job in the world."  From 1976 to 1990, Jan hosted "Evening Magazine," a pioneering nightly program on KPIX TV in San Francisco.  With this program the magazine format for television was born.  As the founding co-host, Jan traveled the world in search of extraordinary people and places in Japan, Russia, China, Australia, Europe, Mexico and all over California and the U.S.

Her most memorable adventures on the show?  Bungee jumping!  And sky diving with the Army's Gold Knights!

For her work on "Evening Magazine," Jan is grateful for the Emmys and awards she received in entertainment programming.  Other honors include:

Co-Host of "Appraise It!"  Home and Garden National Cable TV

Jan maintains an active interest in the community:

She is married to Robert Eves, President of Venture Corporation, a real estate and investment firm.  Jan and Rob have five children-Jaclyn, Jenna, J.B., Meredith and Christopher.  She has co-authored two books:  Having a Baby (1984) and After Having a Baby (1988) and is currently working on a third book on women and leadership.