Music has been an integral part California State University, Fresno since its inception. Among the dozen faculty pictured in the first yearbook of Fresno State Normal School at the end of the 1911-1912 opening year was Arthur G. Wahlberg, for whom the Music Building's recital hall is named. The school's first musical organization, a Glee Club composed of young women preparing to be school teachers, was organized in December of 1911 under his direction and made its first appearances the following spring.

Over the next two decades, as the school grew from a normal school to a state teachers college, Wahlberg continued to lead music studies, with the help of a small faculty that included band director Arthur Forsblad. In 1932, Fresno State Teachers College employed Arthur C. Berdahl, the first music faculty member with a Ph.D. An accomplished composer, conductor, and teacher, Berdahl became the head of the department after Wahlberg's retirement and led the school's music endeavors through 25 formative years, most of them on the original campus (now belonging to Fresno City College). The first bachelor of arts degree in music was awarded in 1935, after the state Legislature removed the word "teachers" from the school's name and authorized degree programs other than those related to the teaching credential.

After World War II, music enrollment burgeoned and the faculty grew, but facilities were limited. Faculty members made their offices in the stageside dressing rooms of the school's auditorium, the music library occupied a few shelves beside the desk of the music secretary, and the only listening facilitywas a single turntable in a closet. Little or no practice space was available until Berdahl purchased a government surplus prefabricated building (assembled by faculty) to tide the department over until fall 1954, when the new campus opened at Cedar and Shaw. Among the first buildings to open was the Music Building, which has recently undergone renovation.

In a history-making transition earlier in 1954, the 70 member Fresno State College Orchestra became the Fresno Philharmonic. Music majors during these years numbered over 200. The college became a university in 1972. The succession of department chairs since Berdahl's retirement in 1955 has included Ralph C. Rea, who headed the department for 12 years, Wilson H. Coker, James H. Winter, John H. Martin, John R. Heard, Phyllis A. Irwin, Jack R. Fortner and Jose Diaz. Today the Department of Music is a part of the University's College of Arts and Humanities. Over the years it has prepared hundreds of candidates for bachelor's and master's degrees in music, and its graduates teach and perform all over the world.

The new addition to the Music Building is the result of five years of careful and well-coordinated planning by the Music Department's building committee and the architectural firms of Robert Marquis and Associates (San Francisco) and Temple, Andersen, and Moore (Fresno). The building was completed in time for the beginning of the 1991 school year. Many of the building's special features have been designed to support performance and instructional needs peculiar to music. At the same time, the new wing has been designed to harmonize with already-existing structures -- the old wing of the Music Building to the west and the Theatre Arts complex to the north. The architectural integration of these buildings, and the construction of a well-appointed dance studio within the new music addition, reflect the historical bonding of the performing arts.

The 65,000-square-foot new facility includes 22 practice rooms, four larger ensemble practice rooms that can accommodate groups of up to eight players, 12 teaching studios, a large dance studio, faculty office space, a conference room, student lounge, and 700 student lockers. Also included are a percussion rehearsal room, percussion storage room, marching band and choir uniform storage area, and a costume work room to support to the opera workshop. The instrumental rehearsal hall, M-127, was designed primarily for the use of large instrument groups. It has a seating capacity of 220, more than double the capacity of the previous space in the old wing. This hall has also been provided with an adjoining storage room. The new choral/opera rehearsal hall, M-126, has a seating capacity of 320 and was acoustically designed to enhance choral and vocal performances. Adjustable acoustical treatments such as drapes and panels allow considerable flexibility, so this hall may be used for a wide variety of performances by both vocal and instrumental groups. A pipe organ was installed during the spring of 1996. 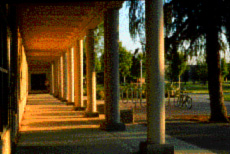 Other noteworthy features of the new building include state-of-the-art recording facilities with two large ensemble studios and 2 small ensemble studios. Located within the building are also two electronic music studio locations, one electronic music lab with 16 computer editing stations, one 24-track digital studio and one 16-channel analog studio. The complex also features one full midi computer lab with 30 stations including keyboards, and a multipurpose computer lab with 25 pentiumII 350mHz stations.

The new addition to the Music Building, combined with the extensive remodeling of the old building, gives Fresno State one of the best music facilities in the 23-campus CSU system. These improvements will enable the Music Department to exert a far-reaching impact on music performance and music education in the Central Valley for years to come.

As Central California's major university, California State University, Fresno is one of the oldest of the 23 institutions within the California State University system. The University was founded as Fresno State Normal School in 1911, became a teacher's college in 1921, and has offered advanced degrees since 1949. The university's popular nickname is "Fresno State." Dedicated to academic excellence, Fresno State annually enrolls over 17,000 students. Fresno State confers baccalaureate degrees in 58 fields and a doctorate in educational leadership. Fresno State's 327-acre main campus and its 1,083-acre University Farm are located at the northeast edge of Fresno, California, at the foot of the majestic Sierra Nevada range. The surrounding San Joaquin Valley is one of the richest agricultural areas in the world, and Fresno County is the sixth largest metropolitan area in California. The university is within an hour's drive of many mountain and lake resorts and within a three- or four-hour drive of both Los Angeles and San Francisco. Prospective students may arrange for a tour of the Fresno State campus through the University Admissions and Recruitment Office at (559) 278-2048.