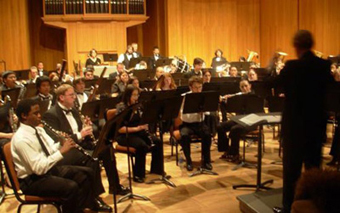 Members of the Fresno State Symphonic Band are exposed to all levels of music and playing. The group is intended as the second wind orchestra for Fresno State and many students play secondary instruments in the ensemble. The group performs a wide variety of contemporary and classic wind band literature. The ensemble is offered in the fall and spring semesters of each year. Auditions are held for part placement only.

The Wind Orchestra is the premiere wind ensemble representing the music department at Fresno State. The Wind Orchestra enrolls the most proficient wind and percussion players from the university. Auditions are held in the first week of each semester and only a limited number of musicians are accepted into this elite group. The University Wind Ensemble has premiered original compositions by world renowned composers such as Philip Wilby and James Sochinski. This performing ensemble has been  featured on many recordings available throughout the US and Europe. On June 2, 1996, the Wind Ensemble made its premiere at Carnegie Hall, sharing the state with the University of Rochester University Choir and the McCallum High School Band. The program included three works written for the Wind Ensemble by Phillip Wilby and James Sochinski. In June of 2000, the Wind Orchestra traveled to the People's Republic of China for a landmark two week tour.