a National Endowment for the Humanities (NEH) project 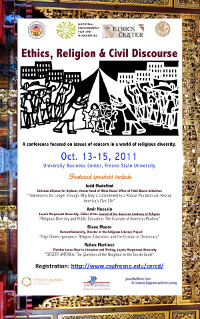 In October, 2011 Drs. Fiala and Biondo welcomed 25 prominent scholars from across the U.S. to Fresno to share their research on civility and the Humanities in diverse American cities. For more information about our featured speakers Jedd Medefind, Amir Hussain, and Diane Moore, please click on their names. On Friday evening October 14, 2011, Bill Nericcio hosted a cultural event at Arte Americas featuring a text performance with guitar by Emmy award-winning writer Rubén Martínez.

Jedd Medefind is President of the Christian Alliance for Orphans.  He is an author of Four Souls (Thomas Nelson, 2001) and served as the White House Director of the Office of Faith-Based and Community Initiatives.

Amir Hussain teaches Theology at Loyola Marymount University in Los Angeles. He is the author of Oil & Water (CopperHouse, 2006) and is the first Muslim editor of one of the most prestigious Religious Studies Journals in the U.S. (JAAR).

Diane Moore is the author of Overcoming Religious Illiteracy (Palgrave, 2007). She directs the Religious Literacy Project for Teachers at Harvard University.

Bill Nericcio is a graphic designer and artist. He is the author of Tex{t}-Mex (University of Texas, 2007) and is the first Chicano Chair of the English Department at San Diego State University.

Rubén Martínez is an Emmy award-winning writer and performer.  He is the author of The New Americans (New Press, 2004) and he hosted "When Worlds Collide" for PBS.

The aim of this project is to understand and promote civil discourse about increased religious diversity in California. This project will advance understanding about ethical and religious topics in a non-partisan and non-sectarian manner while highlighting the ways that regionally significant authors and scholars of the humanities have dealt with questions of diversity and pluralism. The project will build a new institutional network among California Universities, develop a new curriculum for schools, and provide outreach to religious and civic organizations interested in promoting civil discourse to prevent violent conflict.

A Humanities Initiative from The National Endowment for the Humanities

"NEH is an independent grant-making agency of the United States government dedicated to supporting research, education, preservation, and public programs in the humanities."

Jan and Bud Richter Center for Community Engagement and Service-Learning